It’s week 4 of lockdown with no imminent end in sight; nevertheless, the FTSE100 remains stable and 5% higher than a week ago thanks to unprecedented government intervention in London and more recently in Washington.

There are two primary reasons why the market has rallied so much. The first is that the virus news has been better than the worst fears as hard data seems to confirm that across Europe and even in the US the level of increase in the number of pandemic related deaths is slowing.

This would imply that the unprecedented and harsh steps being taken across the world to isolate populations is proving to be effective even if a reliable universal test remains elusive that would perhaps demonstrate how far the virus is now embedded within communities.

The longer-term damage to our first world economy and others like it remains to be seen but I remain convinced that government intervention will ensure that a swift recovery is attainable and, in my view, the most likely outcome.

Last Thursday In the US the Federal Reserve announced a spectacular programme involving the buying up of corporate bonds, even high-yield bonds and municipal debt causing a significant rally in the S&P500 and aligning the US government firmly behind corporate America.

This being the case and in light of the political backdrop of a US presidential election in November the current US administration will do, “whatever it takes” to avoid a prolonged recession and relaunch the US economy.

To illustrate this point I attach data compiled by Blackrock on the likely effects of this Coronavirus induced recession and how this is likely to affect US GDP this year compared to the systemic failures that led to the global banking crisis in 2007. 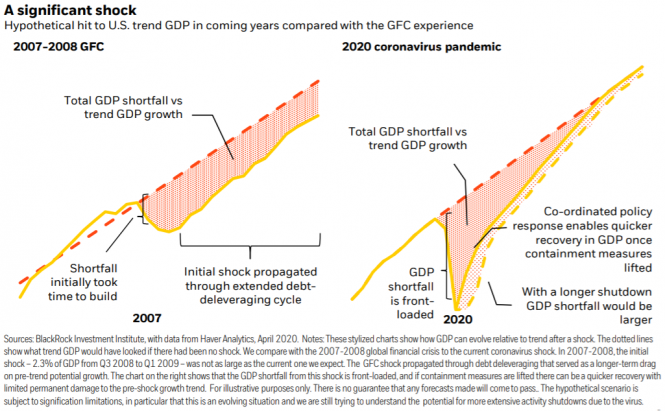 On the assumption that there are no further lockdowns, the pattern identified by the BlackRock Investment Institute is the most likely outcome, there will be a deeper immediate recession than post-Lehman in 2007, followed by a much sharper recovery.

Whilst I am by no means underestimating the human cost of this pandemic, I am increasingly convinced that with an absence of unforeseen bad news I believe that we are now into a sustainable stock market recovery.

There may yet be bigger stories to emerge from this crisis that could yet derail any rebound, I believe the risks from the US are diminishing and that their economy in common with much of the Far East will recover quickly, the European situation is less clear but also arguably less important.

They have significant issues to address which will result in major political change in the coming months and years, but I do not think this will weigh heavily on our portfolios which remain largely light of European exposure.

If, like me, you are confident that global stock markets are far more likely to rise in the coming months from where we are now and, unlike me, you are sitting on cash deposits earning almost no interest, please do make contact with us.

The stock market opportunities ahead of us are uniquely favourable, of course there will be companies that fail in the coming weeks but for the survivors the future looks bright, we have an opportunity to emerge from this economic shock in surprisingly good shape.

Personal disposable income for most in this country has actually improved as we have little opportunity to spend and savings ratios have been further helped with a cut in the cost of borrowing.

Opportunities are hard to identify in the present but seem so obvious with the benefit of hindsight; this could just be the best opportunity that we have seen in the past decade.

Our ongoing best wishes to you and your family, Matthew.